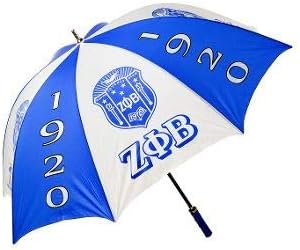 New Greek Paraphernalia 30" Jumbo Umbrellas are a perfect combination of technology and style. Made to resist the wind and keep you dry, each umbrella has carbon fiber ribs and a strong 9 edition shaft. Each umbrella has a heavy duty rubber comfort handle and comes packaged in a matching sleeve.